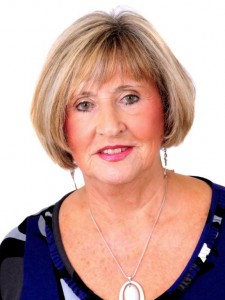 Although my parents were both Eastenders, they had moved to west London before I was born and I grew up in Hanwell in the Borough of Ealing, the youngest of a family of six children. I had a wonderful ‘free range’ childhood, playing in the street and exploring the area with no fear of danger but plenty of grazed knees which nobody worried about back then.

After I left school I worked in an office, was mad about the latest fashions and loved to go out enjoying myself. In those days I was the last person you would expect to have a career as a writer.
Like most girls at that time, a handsome husband was on my wish list and this was granted when I met and married lovely Fred and we had two fine sons. It wasn’t until the four of us moved to Wales that I had a kind of mental awakening when I discovered that I could do interesting things with words.

On realising this, I instantly wanted to be a professional writer which was unrealistic for someone with only a basic education and a small vocabulary. But I was hooked on writing and a publishing deal had become my dream. I started off with light verse, then short stories, then novels, all of which were rejected because they weren’t good enough, though I didn’t accept that at the time and was crushed every time something came back. I kept going, though, reading, writing, learning and sending work out. Publishing seemed like a magical world to me and, as an unpublished author, I was very much outside of it.

Eventually I got to be good enough for an agent to take me on and it all happened from there. Although I didn’t realise it during those years of rejections, when I had thought I was failing spectacularly, I had actually been learning my craft; doing my apprenticeship.

It took me a while but I got there in the end and boy did it feel good!! Still does. Even now, after twenty eight books and number twenty nine coming along nicely, I still love being a published author.

I am settled back in England now and am nearer to the family, which now includes five grandchildren. Writing is very important to me and I would hate to be without it, but I still find time to do other things and lead a full life.