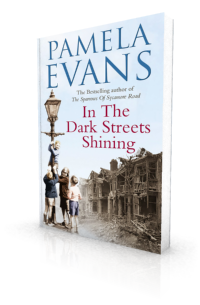 When Rose Brown’s husband is killed at Dunkirk in 1940, she feels as though she’s lost a part of herself. Rose can’t imagine the future without Ray, but she’s certain he would have wanted her to start again. She decides to volunteer as a postwoman in West London, and when she courageously rescues a young boy from a bombed-out house and takes him home, she finds a new sense of purpose. Traumatised from losing his mother in the ruins, seven-year-old Alfie is also rebellious and withdrawn. However, he touches the hearts of Rose's family, and with kindness, patience and love, they eventually win his trust. But then a handsome stranger, Johnny Beech, turns up on the doorstep, looking for his son, and everything changes...

Reviews of In The Dark Streets Shining